Yong Zhao: Introduction to New Book: Learning for Uncertainty: Teaching Students How to Thrive in a Rapidly Evolving World 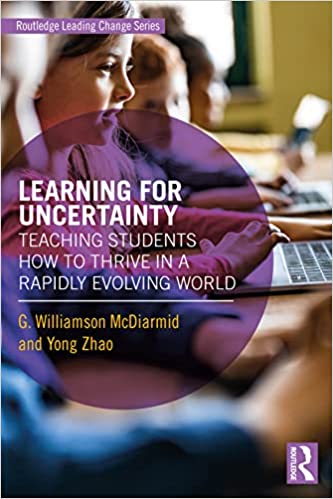 Learning for Uncertainty: Teaching Students How to Thrive in a Rapidly Evolving World

How do we prepare our children for a world that is yet to be made? This is the question we want to know and we try to explore in this book.

As we write this, educators across the globe are struggling to educate students amidst a world-wide pandemic.  Many are being stretched to adopt and use unfamiliar instructional technologies and pedagogies.  For their part, most students, who might be quite comfortable with social media, are trying to adapt to unfamiliar ways of interacting and learning, with mixed success. As stressful as the situation is for educators and students and their families, adoption of online teaching and learning technologies are accelerating changes that were likely inevitable. Even prior to the pandemic, online education was on the rise and some teachers had begun to use various new technologies such class management systems and flipped classrooms.

Looking into the near and mid-future, this generation’s facility and comfort with various technologies is essential.  They will face a world of work increasingly shaped by technology.  Many current jobs will fade away or be significantly altered by technology.  Many new jobs will be created by evolving technologies that we cannot foresee.  Technology is already changing daily life from smart homes to driverless cars to wearable tech. Not only is change occurring but it is occurring at an ever more rapid pace.

The pandemic has also spurred the rapid evolution and adoption of technologies that improve and save lives. Telemedicine expanded rapidly in 2020 and 2021.  Unable to see patients face-to-face, medical professionals are diagnosing and treating illnesses with the help a range of technologies, crowdsourcing, and “big data.”   Recent discoveries about DNA and RNA as well as CRIPR technology enable cell-level manipulations of genes.  Greater understanding of RNA informed the development of vaccines that are effective in shielding us from the Covid-19 virus.

Returning to the issue of social media, we are also writing at a time that social media is under greater scrutiny than ever before.  The rise and proliferation of social media has enabled people everywhere to connect and communicate and share joys, sorrows, grievances, laughter, cat antics, baby’s first step, and more.  Online communities such as those for programmers enable developers to learn from others’ discoveries and mistakes.  The darker side of online communities was exposed by the attack on the U.S. Capitol on January 6, 2021.  The insurrectionists planned and coordinated their attack via several social media platforms.  Social media has opened a Pandora’s box of outrage, hatred, misinformation, and conspiracies that has led, as we have recently witnessed, to violence.

Awareness of and concerns about the increasing power of “Big Tech” – Amazon, Apple, Alphabet, Facebook, Microsoft –are also growing.  As they accumulate data about us, their power continues to grow. A 2018 Pew survey found that 95% of teens have access to smartphones and 45% report being online almost constantly (Anderson & Jiang, 2018).  Recording, saving, and aggregating every key stroke and applying proprietary algorithms to the amassed data, these largely unaccountable private companies may know more about us than our family and friends.  Their goal is to monetize the resulting volume of data they collect, a goal that research on human behavior has significantly aided and abetted.  As a recent documentary on social media demonstrated, what big tech wants most is for us to return again and again, almost like Skinner’s pigeons returning repeatedly to feed – in the case of humans, to feed our psychological needs.  Each time we return to a page or website, we are providing more information about ourselves:  Our wants, needs, fears, insecurities, obsessions.  Online retailers as well as political operatives pay large sums for these data and apply their own algorithms that enable them to manipulate our emotions, vulnerabilities, and even self-images.

This is not, of course, the whole story about new technologies. Technology has created a different world and made the world both worse and better for everyone. Technology is inextricably intertwined with geopolitical events and the shifting order in the world. While the term “globalization” is maybe relatively new, the phenomenon is not.  Global trade has been going on for centuries, even before the Silk Road and the Incense Trade Route of lore.  World had been steadily growing for decades with occasional and temporary declines such as the current pandemic-related downturn.

The world has, indeed, become a global village but a village consisting of many different tribes, some of who have benefitted disproportionately from globalization. The potential for major conflicts within nations and among nations remains great. Competition for scarce resources, land, and markets is probably as fierce as ever — as are nationalism and collective national grievances. The future of geopolitics is filled with uncertainty and unknowns as technologies continue to accelerate globalization as well as the potential of nations to use technology to spy on and disrupt rivals.

Technology and the economy are deeply intertwined. The widening opportunity and income gaps are partially responsible for today’s political and social unrests globally and will doubtlessly continue until addressed properly. As it the past, the future world economy will likely see major upturns and downturns, but how inequality among different groups within a nation and among groups across nations is addressed will significantly shape the future. Climate change likely will continue to exacerbate inequities as a warming world will force population migrations from parched lands to seek lives in more temperate climates.[i]  According to the New Times, although 1% of the world is currently a “barely livable hot zone,” by 2070, 19% of the earth will be so.  Among future uncertainties is:  Where will the people in the hot zones go?

So, what does all this have to do with schools and schooling?  Everything.  A primary role of schools is to prepare students to live in the future. The future is not pre-fabricated, just waiting for the arrival of today’s students. Rather, the future is what today’s and future graduates will create. Even as we write, students are shaping the world as they mature, although their contribution is relatively modest compared to the impact they will have on the future.

To say that technologies are mere tools is true — even if it is also a truism.  This is, however, the starting claim for the contention that to productively wield technology requires humans who understand both technology and themselves, possess the knowledge to capitalize on technology’s affordances and mitigate its dangers, and the moral judgment to determine when it is and isn’t being employed for the betterment of their communities and the society.

The questions for us are:  Are we preparing students to both take advantage of what emerging technologies offer and recognize the potential dangers that these technologies – especially social media, algorithms, big data, robotics, and AI – pose to themselves, to their society, and to democratic processes and institutions?  Is the current wave of educational reforms – labeled as “neoliberal” by some – that has spread across the world likely to prepare students for a difficult-to-predict world of new technologies?  Given a rapidly changing commercial world, are we positioning students to learn-on-the-go as existing jobs are transformed or disappear and new jobs emerge?  Are the widely touted “21st Century Skills” sufficient preparation for this new world?  What of other conceptualizations of the skills and dispositions believed needed for the future, ideas such as STEM (or STEAM), “socio-emotional learning,” “deep learning,” and “soft skills”?  How and where are the young to learn these?  Do these capture the skills, knowledge, and dispositions that a highly uncertain future requires?

Further questions that interest us include: How are our students being introduced to the world in which they will need to make a living and to live, we hope, satisfying lives? How are they to engage with society? How do they protect and promote democratic institutions and values like civil liberties, justice, respect for others, and inclusivity? How do they view others, particularly those who hold different values, beliefs, and customs? How do they work to reconfigure globalization for the good of all, not just the favored few? How will they reconcile resurgent nationalism with the imperative to collaborate globally to address existential threats such as climate change and debilitating economic and political inequities?

These questions are some of the questions we will attempt to address with a deep sense of humility engendered by uncertainty and recognition of the limits of our knowledge.  We also recognize that there are many who have greater understanding of the issues we try to address.  Yet, our beliefs and commitments compel us to offer our assessments of the challenges the future will pose to current and future students. To wait until we felt we had the depth of knowledge and understanding required for more definitive conclusions and suggestions would mean this project would likely never be completed before we checked out of our mortal coils.  And just as climate scientists describe the “inflection point” for climate change after which damage is irreversible, we feel that perhaps we are reaching an inflection point for education.  We worry that current systems may not provide the experiences and learning opportunities necessary to cultivate on a large scale the innovative, iconoclastic, and generative thinkers and creators needed for a future that nourishes the minds, bodies, and spirits of everyone.

With trepidation, we offer some ideas about learning opportunities and educator roles that may have the potential to bring about the changes needed.  Some of these involve “unschooling,” long a marginalized and criticized vision of how to better support the development of skills, knowledge, and moral values in the young.  We worry that the inherent “grammar” of schooling is difficult to change significantly and inhibit the larger project of developing people who are creative, caring, socially minded, skilled, inquisitive, intellectually flexible, and skeptical.  At the same time, we have faith that there are many educators who, given the right resources, support, and opportunities, can create experiences that will engage, inspire, and embolden their students.  This is what, ultimately, makes us hopeful about the uncertain future.