Most New Jersey school districts are starting the 2020-21 school year this week — although the way they are starting varies quite a bit. This year, some districts are fully remote, while others are offering a limited form of in-person instruction known as a “hybrid” model. Many of the districts offering the hybrid are rotating students in cohorts that switch between in-person and remote instruction; this way, students get at least some time in their school buildings.

The Murphy administration initially wanted all districts to offer some form of in-person instruction; however, many pushed back, saying they were not prepared. A large part of the problem is staffing: many districts are having trouble finding replacements for the wave of teachers who retired early or took leaves of absence rather than return during a pandemic. Governor Murphy has since allowed districts to apply to start the year remotely.

NJ Spotlight published a list late last week of which school districts — including charter schools and private schools approved for special education — would be implementing which model to start the year. I thought it was worth taking some time to crunch the numbers, even if many plans are, as of this writing, still under review. The list I’m using omits almost 200 districts, including every one in Hudson County. Still, it’s instructive to see where we are as of now.

Let’s start by looking at how many students are enrolled in schools implementing different types of plans. I’m omitting students in private schools, but including charter school students. 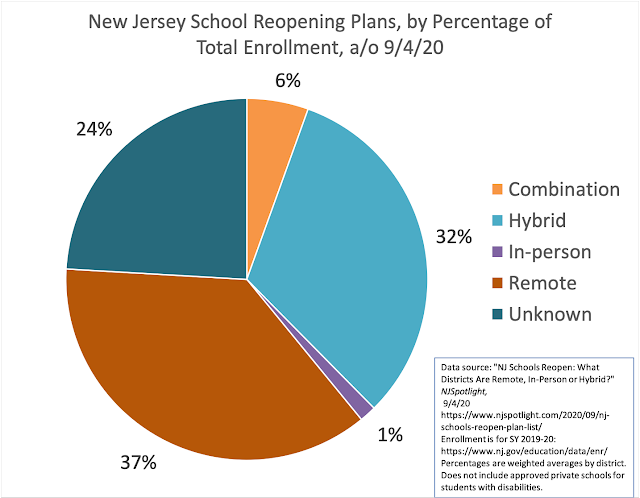 About one-quarter of students are in schools where the data on their reopening is not yet available. Of the remaining districts and charter schools, only one percent are in fully in-person schools. “Combination” districts are those where some schools are remote and some are in-person or hybrid; only six percent of students are in these schools. 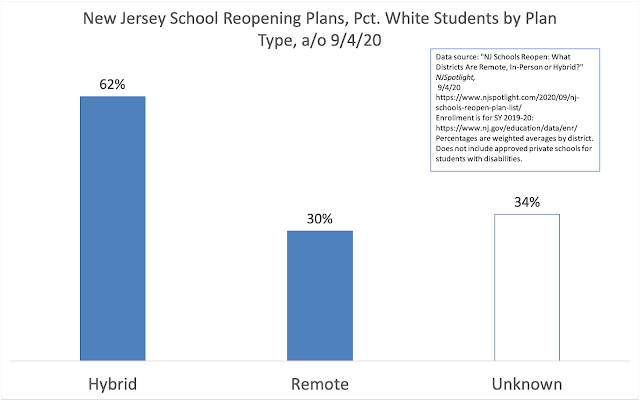 Of all the students who are attending a hybrid program, 62 percent are white. Compare that to remote programs, where only 30 percent of students are white. That percentage is close to the percentage of unknown programs. 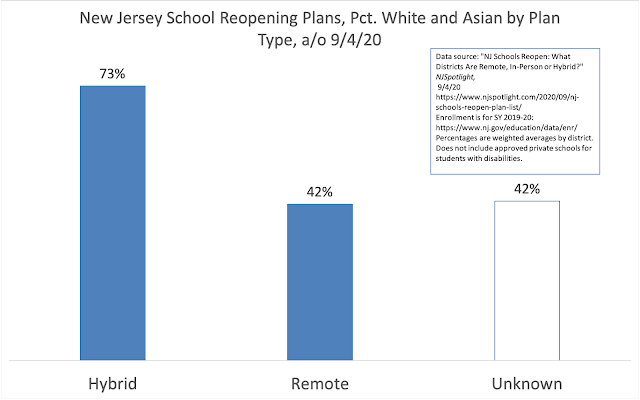 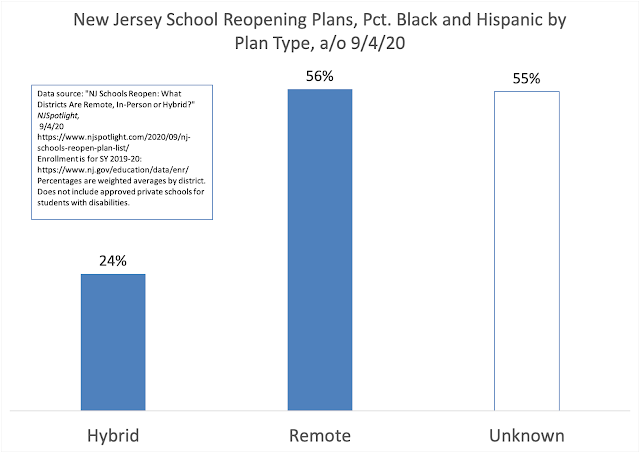 Similar differences are found when comparing schools on the enrollments of students who qualify for free or reduced-price lunch, a proxy measure of student economic disadvantage. 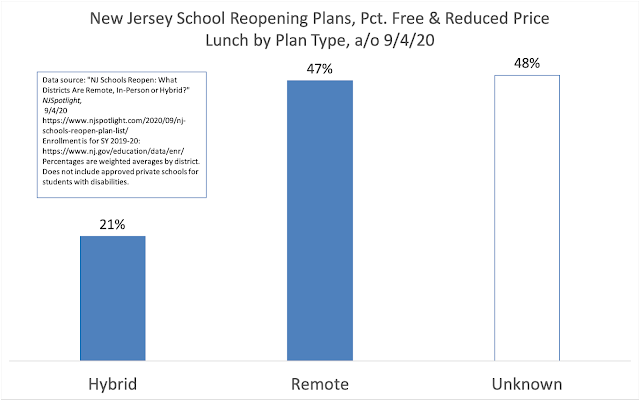 Now, as Bruce Baker and I have pointed out before, school districts that enroll larger proportions of Black and Hispanic students are more likely to be underfunded, relative to the target set by the state’s funding law, SFRA. These districts should be receiving more money, either through local revenues or state aid; however, their actual revenues are under what they should be to provide what the state says is an “adequate” education.

So how does school funding align with reopening plans?* 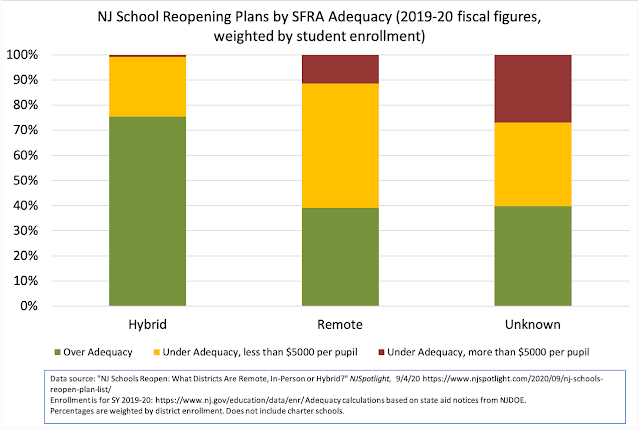 School districts going fully remote are more likely to be underfunded compared to districts that offer a hybrid model. About three-quarters of the students attending a school with a hybrid model also attend a school that is funded over its adequacy target. But that’s true for only 40 percent of students attending a remote district. And over 10 percent of those students are in a district that is severely underfunded — more than $5,000 per pupil.

There are several possibilities as to why this is. It could be that more underfunded districts are responding to parents’ desires to keep their children home. Perhaps parents feel this way because they don’t believe the schools have the resources needed to keep students safe. Or it could be that parents would like a hybrid option, but districts can’t make it work because of space restrictions or a lack of resources.

It’s also possible this is all a coincidence… but I doubt it. Schools need more funding than they normally would to open safely in a pandemic. What we are likely seeing now is the logical consequence of years of inequitable funding — even in a state that used to be one of the leaders in school funding reform.

I’m keeping an eye on all this and will update the data as soon as it’s available.

* I omitted charter school students from this graph. The issue is tricky: some charter students attend schools in districts different from where they live, so we can’t know if their resident district, which sends revenues to their charter, is underfunded or not. If and when we get final numbers, I’ll try to dig into the issue further.