Earlier this year, I posted about the racial inequities in New Jersey’s school reopening plans, which were all affected by the COVID-19 pandemic. Following that blog post, I used some updated data, refined my analysis a bit, and wrote about it over at the NJPP website. In both of these analyses I relied on data published at NJ Spotlight (an invaluable source for news about education policy in the Garden State).

Turns out NJ Spotlight just updated their list of NJ school districts and their COVID-19 operating plans. Let’s first give props to Spotlight’s Colleen O’Dea for keeping on top of these data updates.

With a few tweaks of my statistical program’s code, it’s not too hard to see how things have changed over the last few months. But let’s review what I found back in September:

Before I get to the update, let me be clear about what I’m presenting. The analysis here is not what students are actually doing; it’s what their districts offer. Governor Murphy has required all districts to offer fully remote instruction during the pandemic. But some districts also offer students the option of at least some in-person learning. What I’m presenting here are the options districts offer their students and their families — it’s not what those families actual decide to do. 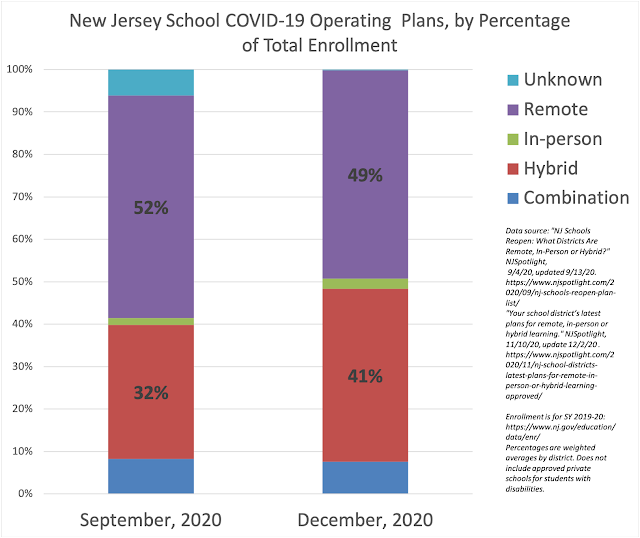 Let’s see if that’s changed the racial disparities in whether in-person schooling is offered:

So far as Black students are concerned, there’s been little change. 7.3 percent of students in hybrid districts were Black back in September; now it’s 7.8 percent. The remote districts were 20 percent Black; now they’re 21 percent.

The graph above shows a distinct change in the percentage of Hispanic students in combination districts — districts that offer hybrid in some grades and remote in others. But remember: these districts enroll less than ten percent of all students — they’re not a big factor. There’s actually very little change for Hispanic students in their options. Like Black students, they are more likely to be enrolled in remote districts than hybrids.

So there was a clear racial bias in COVID-19 school operating plans back in September… and that bias has not gone away. Why is that?

As I noted back in September, whether a district offered in-person learning was clearly correlated with whether that district is adequately funded: 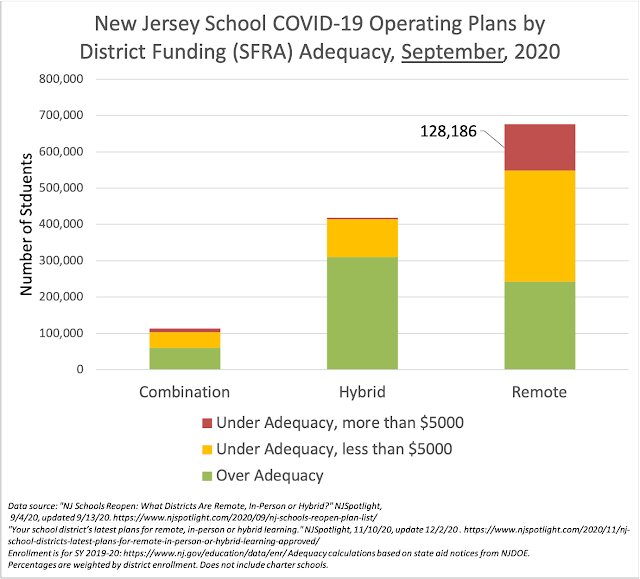 New Jersey’s school funding law, the School Funding Reform Act (SFRA), sets an “adequacy budget” per pupil. This is the amount the state’s own law says a district needs to provide an adequate education for its students. SFRA recognizes that schools serving students in economic disadvantage, or who are limited English proficient, or who have a special education need, need more resources to equalize educational opportunity.

Unfortunately, New Jersey has not followed the state’s own law when it comes to school funding. There are many districts that are inadequately funded — some by more than $5,000 per pupil.

There are several different ways to calculate the adequacy gap. What I do here is slightly different than what Bruce Baker and I did for our latest report on SFRA, but by either method, there are about 130,000 students in these severely underfunded districts. In September, I found that just about all of these students were in school districts that only offered remote learning.

Well, in December we now have more children in hybrid programs. But guess what? Nearly all of the students in severely underfunded districts are still in schools that only offer remote learning. 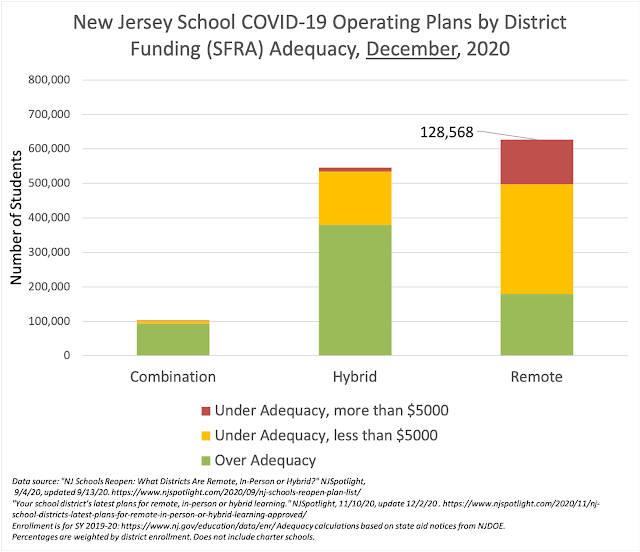 School districts that do not have adequate funding don’t have the same access to revenues to maintain their facilities, including their HVAC systems. As Bruce and I show, these districts have fewer staff per pupil; it’s much harder to offer both remote and in-person learning when you don’t have enough staff to divide up the responsibilities for two modes of teaching. Underfunded districts are hard-pressed to provide their students and staff with PPE and other necessary supplies to make in-person schooling safe. They won’t have the custodial staff necessary to increase work hours for extra cleaning, or the technology to implement instruction that allows for students who are in-person and on-line to learn together.

There is no question that funding adequacy is a major factor in determining whether a school district is able to offer in-person instruction. If funding didn’t matter, why haven’t at least some of the state’s inadequately funded districts started offering in-person instruction? They’ve had the time to plan — what they haven’t had are the resources.

As I said back in September: the pandemic has surfaced the consequences of inadequate and inequitable school funding. More recent data confirms this basic truth. I know we’re all waiting for the vaccine, and for a return to some semblance of normality — but we can’t go back to normal. The pandemic is a wake-up call. It is wrong to continue to deny schools what the state’s own law says they need to do their jobs.

Much more to come on what it will take to equalize educational opportunity here in New Jersey, and elsewhere. Stand by…