The estimable Colleen O’Dea from NJ Spotlight News continues to do New Jersey a service by updating the data on school instructional models during the pandemic. I’ve been collecting her updates, including the latest one from late in January, and matching it to enrollment and funding data from the NJDOE.

I did my first report on this for the New Jersey Policy Perspective back in October, and have updated my findings here several times since (here and here). Let me be clear: these are not reports about how many students and families are electing to participate in remote, hybrid, or in-person learning. Rather, I’m showing what the options are for students in their school districts.

A school district, for example, may offer hybrid learning (a combination of limited classroom time and virtual learning at home) to its students; however, those students may choose to stay home full-time. But a student in a “remote” district won’t have that option: they never get to decide whether they want to come to school at least part-time.

There are four categories of instructional models in the data

The reports I’ve been doing, based on O’Dea’s data, have been getting a fair bit of attention for two reasons. First, there is a clear racial bias in the instructional models being offered. Students of color are much more likely to be in districts where only remote learning is offered.

Some have suggested this is because Black parents are especially wary of sending their children to school, and districts are responding to their wishes. But that brings up the second finding of my reports: the remote-only districts are far more likely to be underfunded, as measured by the state’s own law on school funding.

This makes sense, because a district that offers hybrid learning very likely needs more resources (per student) than a district that doesn’t. Most hybrid districts are cohorting their students: dividing them into groups and then rotating them so class sizes are small and social distancing can be maintained. To do this, there have too be enough staff to deliver remote and in-person instruction simultaneously, even as fixed costs like transportation and facilities management remain the same. That’s going to cost money.

Now that we’ve got the background, let’s see where New Jersey stands as of now on its pandemic instructional plans. We’ll start by looking at how things have changed since the fall. 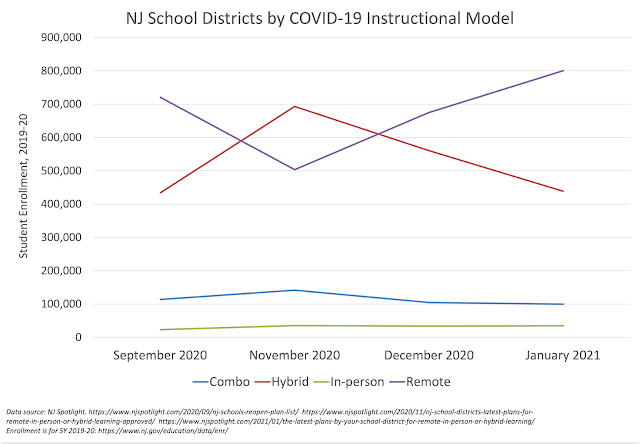 A couple of weeks ago Governor Murphy said more schools were opening for in-person instruction. But my data-crunching shows we actually have more students in remote learning than we did back in September. Granted, we had more students in districts with unknown plans at the start of the year; still, the numbers of in-person, hybrid, and combo students haven’t changed much.

What’s interesting is that it appears that there were districts who tried to move to hybrid in the fall, but then stopped and went back to remote going into the winter. Was this a reaction to the wave of new cases that started when the weather got cold?

Let’s next look at the racial/ethnic profile of students attending districts with different instructional models. 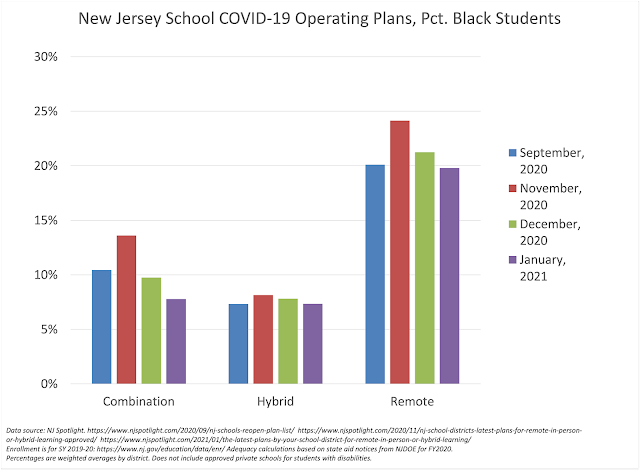 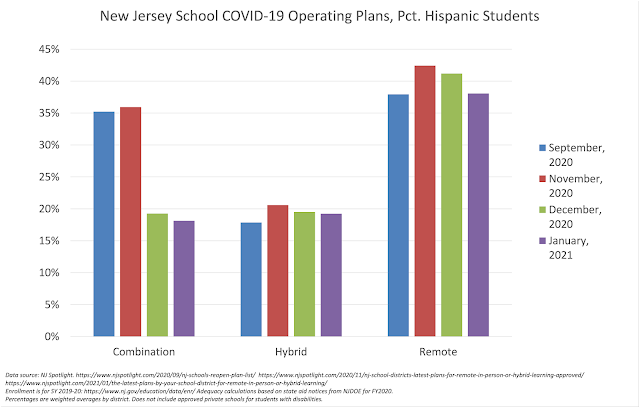 I’m not quite sure about the dip in combo districts’ Hispanic percentage, although the number of districts using that model is small enough that only a few would have to change to see a significant shift. That said, there is a clear and persistent difference in the ethnic profile of hybrid and remote districts.

This is naturally reflected in the percentages of white students: 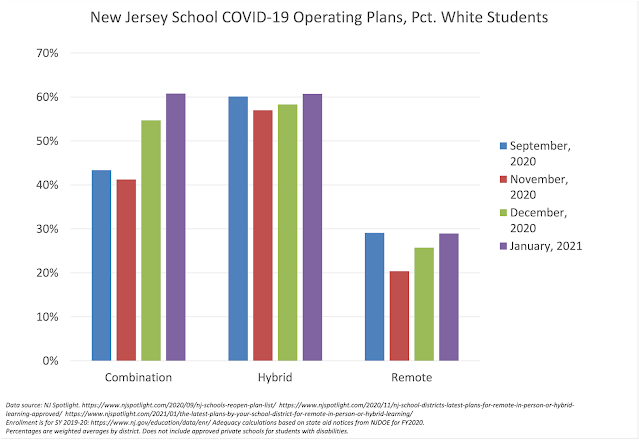 In New Jersey, white students are more likely to have the option of attending school in-person at least part of the time compared to Black or Hispanic students.

It’s worth noting that there are also differences between students who are eligible for free or reduced-price lunch, a proxy measure of student economic disadvantage: 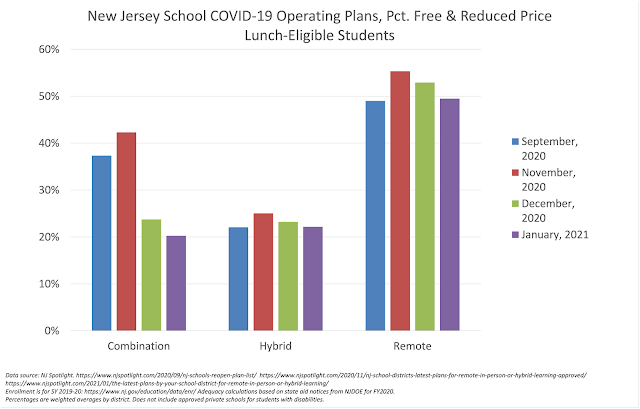 So why is this? Well, as Bruce Baker and I have pointed out many times (here’s the latest), Black and Hispanic students are far more likely to be in school districts that the state’s own law says are underfunded. And it turns out the districts most likely to be fully remote are those that are underfunded—a condition that has remained the same throughout the pandemic.

You can see my figures from October in the NJPP report. Let’s jump ahead a bit to November; the situation remained the same. 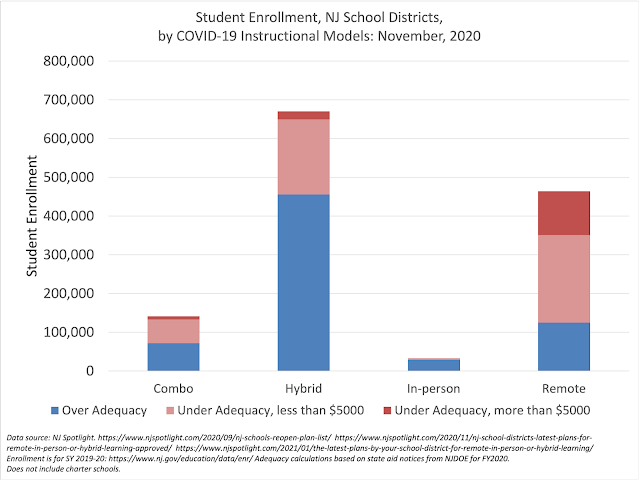 Almost all school districts that are deeply underfunded—more than $5,000 per student—were offering only remote learning back in the fall. That changed little in December… 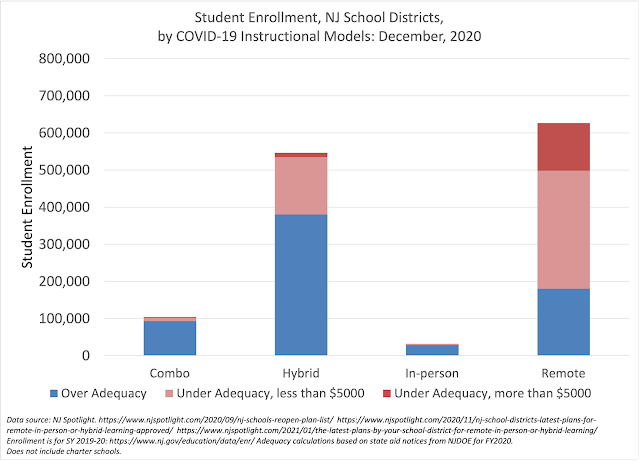 And even less in January: 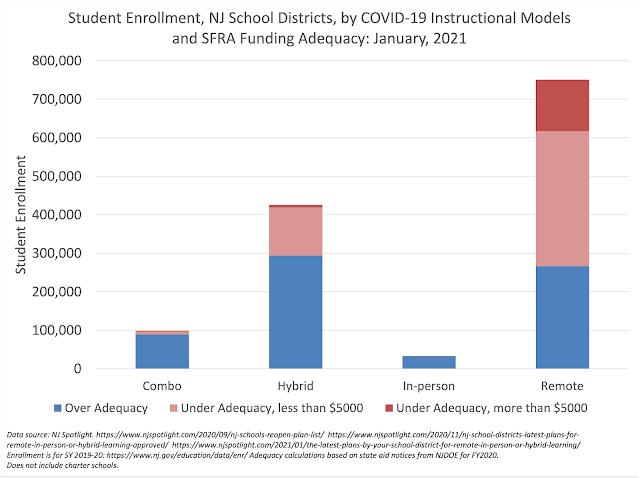 I don’t see how anyone can argue that school funding has nothing to do with pandemic schooling: Consistently, the students in the most underfunded New Jersey school districts have been denied any opportunity for at least some in-person instruction.

With vaccines around the corner, the school year halfway over, and the new state budget season coming up, I don’t know if we can fix this in the short term. But we have got to acknowledge that long-term, structural deficiencies in school funding are creating unequal education opportunities for New Jersey’s students. The pandemic didn’t create these inequalities, but it did make it impossible to argue that they don’t matter. Addressing this problem has got to be at the top of the state’s policy agenda.

I’ll keep updating my findings as new data becomes available. Until then, we’ve got some other important things to discuss—stand by…