Hack Education: ‘Luddite Sensibilities’ and the Future of Education

This is the transcript of my keynote at the Digital Pedagogy Lab this morning. Except not really. It was a “flipped” keynote, so this is more like the pre-reading for what I actually talked about. Sort of.

I have really struggled to prepare a keynote for you all. This isn’t the first talk I’ve done since my son died. Hell, it’s not even the second or third. But this one has been the hardest to write, in part because I am so close with so many of you in the DigPed community, and what I want right now is to be with you, in person, to cry with you and laugh with you and rage with you and scheme with you.

I know that we’re all struggling to muddle through this crisis — or these crises, I should say: the pandemic, economic precarity, school re-opening, police violence, creeping authoritarianism. So much loss. So much death. And I know that it’s probably for the best that we use digital technologies in lieu of gathering face-to-face — for school or for work or for professional development or for socializing. Plenty of folks insist that these digital tools can be used well for teaching and learning, that online education doesn’t have to be inferior to offline, that offline can be pretty wretched already. (Indeed, that’s likely why you all are here: to work on bettering your digital pedagogical practices with an eye to equity and justice.)

But I remain steadfast in my criticism of education technologies in almost all their forms and functions. Indeed, the problems that we’ve long identified with ed-tech — privacy violations, security concerns, racist algorithms, accessibility and access issues, all-male leadership teams, outsourcing, disruptive bullshittery, and so on — are still here. And I fear we are at a particularly dangerous crossroads for education because of ed-tech. The danger is not simply because of the entrepreneurial and the venture capitalist sharks circling our institutions, but also because the narratives, long foisted upon us, about the necessity of ed-tech are becoming more and more entrenched, more and more pervasive. These narratives have always tended to repress the trauma and anxiety associated with the adoption of new technologies and more broadly with the conditions, the precarity, of everyday life. These narratives want us to forget that ed-tech is, first and foremost, beholden to the ideologies of machines, efficiencies, and capitalism.

But this is ed-tech’s big moment, or so we’re told. And all those folks who predicted a decade or so ago that schools would all be online by 2020, that universities would all be bankrupt may just be right.

So, that’s the other struggle I’ve had trying to prepare this keynote. What — right now — do I have to offer as a speaker? I mean, who really needs to hear me be Cassandra when we can all see the impending doom? Who wants to hear me criticize the LMS or the video-conferencing software when we’re stuck with it.

But that’s the message of this talk, I suppose: we’re not.

We’re not stuck. We don’t have to surrender. We can refuse, and we should. And we should support students when they refuse. These can be little refusals — small acts of resistance, obfuscations, that come from positions of little to no power. These can be loud refusals in support of those with little to no power. We can push back, and we can demand better. It didn’t have to be like this (imagine me gesturing widely), and it doesn’t have to be like this (imagine me pointing at the screen).

In 1984, novelist Thomas Pynchon wrote an article asking “Is It O.K. to Be a Luddite?” Regardless of what Pynchon thinks, I’m here to tell you that yes, yes it is. Luddites are imagined as the “counterrevolutionaries” of the Industrial Revolution and as such the enemies of science and technology. The name “Luddite” is used as a pejorative to dismiss anyone who frowns at technology, anyone who’s perceived to be clinging to tradition over “progress.” But the Luddites have been unfairly maligned, I’d say, as this group of late 17th / early 18th century English textile workers — skilled, technical workers — were not opposed to machines despite their famed machine-smashing. What they opposed were the exploitative practices of the textile factory owners — that is, the emerging practices of capitalism. The Luddites’ tactic of what historian Eric Hobsbawm called “collective bargaining by riot” was used by workers in other industries as well.

I’m rather fond of Pynchon’s essay because it weaves together several strands about Luddism — that Ned Ludd first smashed a stocking frame in Leicestershire in 1779; that Lord Byron was one of the only members of Parliament who opposed legislation in 1812 that would make the smashing of loom machines punishable by death; that Byron wrote “the Song of the Luddites” in 1816 — a “hymn so inflammatory that it wasn’t published till after the poet’s death” (part of which, incidentally, I have tattooed on my right forearm — “Down with all kings but King Ludd”); that the previous summer, Byron had spend with his friends Percy Shelley and Mary Shelley at a chateau on Lake Geneva where the latter wrote arguably the greatest science fiction novel, Frankenstein. Pynchon calls Frankenstein a Luddite novel, and I think it’s fair to call it an ed-tech novel too, because it isn’t simply about questions of science and ethics, but about education — or rather the mis-education of both Victor and the creature.

Pynchon does not mention one of the other interesting bits of Byron trivia — and trust me, there are many: his daughter was Ada Lovelace, the mathematician who helped Charles Babbage write algorithms for his proposed Analytical Engine, a general purpose computational machine. Ada Lovelace is often called the first computer programmer. Nor does Pynchon mention that we can trace the history of computing back not only to Lovelace but to the Jacquard machine, an automated loom device invented in 1804 that was run via punchcards — each card corresponding to the pattern to be woven. These would have been nice details for Pynchon to include, I’d argue, as at the end of his essay he speculates that the “Luddite sensibility” would struggle in the dawning Computer Age, that few Luddites would be willing to smash these new machines as they’d believe computers would help us to “cure cancer, save ourselves from nuclear extinction, grow food for everybody, detoxify the results of industrial greed gone berserk.” Rather than a machine of exploitation, Pynchon argued, the computer would become a tool for revolution, one that, with its immense data-analyzing capabilities, would finally overturn the “permanent power establishment of admirals, generals and corporate CEO’s.” 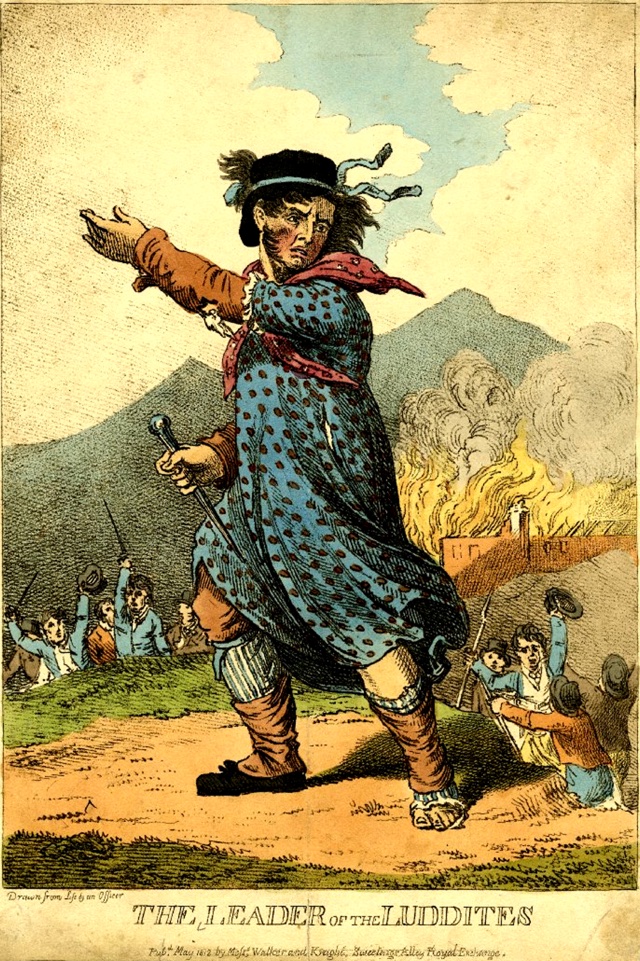 Unlike Pynchon, I do believe the “Luddite sensibility” survives, although not necessarily, as the insult suggests, in those who drag their feet in adopting the latest gadget. And this seems to be a perfect time to cultivate it further. Recall, the Luddites emerged in the economic devastation of the Napoleonic Wars — they wanted jobs, yes, but they wanted freedom and dignity. As we face economic devastation today, we need some solidarity and perhaps even a little sabotage. We can look at ed-tech as something to smash knowing that what we aim for are the systems of violence, exploitation, neoliberalism, mechanization, and standardization ed-tech that demands.

This requires more than a Luddite sensibility. It requires a Luddite strategy. And for us, I’d say, it is time for a Luddite pedagogy.

A Luddite pedagogy is not about making everyone put away their laptops during class — remember those days? Again, Luddism is not about the machines per se; it’s about machines in the hands of capitalists and tyrants — in the case of ed-tech, that’s both the corporations and the State, especially ICE and the police. Machines in the hands of a data-driven school administration. Luddism is about a furious demand for justice, about the rights of workers to good working conditions, adequate remuneration, and the possibility of a better tomorrow — and let’s include students in our definition of “worker” here as we do call it “school work” after all.

A Luddite pedagogy is about agency and urgency and freedom. “A Luddite pedagogy is a pedagogy of liberation,” Torn Halves writes in Hybrid Pedagogy, “and, as such, it clashes head on with the talk of liberation peddled by advocates of ed-tech. According to the latter, the child, previously condemned to all the unbearably oppressive restrictions of having to learn in groups, can now be liberated by the tech that makes a 1:1 model of education feasible, launching each and every child on an utterly personal learning journey. Liberation as personalization — here the Luddite finds something that ought to be smashed.” A Luddite pedagogy doesn’t sneer when people balk at new technologies; it doesn’t assume they won’t use them because they’re incompetent; it finds strength in non-compliance.

Let us be Luddites, not pigeons.

(You can read what I actually talked about in my keynote here.)