Sometimes it’s what people don’t say that tells you a lot about their position. 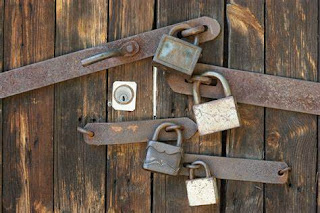 When the private or charter schoolhouse door is locked, it is most often the people inside who have locked it. Why are choice fans not after them to open their doors?

When cries go up that students have to be rescued from their “failing schools” and must be released from being trapped in their zip code, why do none of these complaints ever address the people who already have lifeboats in the water, calling on them to carry more children to safety?

Why not demand that the pricey privates use their endowments to extend more scholarships? Why not insist that the Catholic Church use its billions of dollars to welcome more students into its huge chain of private schools? Why is nobody giving Eva Moskowitz grief about the families she chases away from Success Academy? Why is there so little talk from choicers about all the seats going empty because charters refuse to backfill and replace students who leave? We know most of the tricks that schools use to make it “school’s choice”–why aren’t choicers who are in it For The Children out there hollering, “Knock that off right now”?

Why do so few voucher systems include any safeguards for students and families, so few guarantees that when they find the school that’s the “best fit,” their “right” to make that choice will not be violated by the school itself?

Heck, why not demand better wages for American workers so that more parents could afford to keep one parental unit out of work to home school instead?

School choice is, after all, widely available right now–except for the barriers of school’s admission policies and tuition price tags. It is within the schools’ power to fix both of those so that school choice would be more readily accessible to families. And yet, nobody in the school choice movement raises their voice to make this argument.

I don’t know, but I can guess at some of the arguments.

“Even if private schools open their doors wider, we’d still be asking parents to pay for school twice.” But nobody pays for school twice, because nobody pays the full price to send their child to school even once. I pay my property tax, and some other undefined amount of school tax through state and federal channels. It does not remotely add up to the price per pupil–even less so if we’re talking about more than one. And if we accept this argument, then we open the floor to folks who want to argue that their kids are grown and why should they be paying any money at all for school taxes?

“It would cramp the school’s style to just fling open the doors.” Sure. But either we are in favor of a system that takes responsibility for educating all children, or we don’t. If private schools want to exist outside of that all-children system, they don’t need to take the money that’s paid by taxpayers to maintain that system. That makes no more sense than saying, “I want to build a nice private park, but I want the government to give me public tax dollars to help pay for it.”

But here’s the thing–if actual choice were the main concern here, advocates could argue for vouchers etc at the same time they lobbied for more open access to private schools. But for many, it’s not about choice- it’s about taxpayer-funded choice, or transforming a public system into a privately owned-and-operated system. It’s not about access to choice for students; it’s about access to tax dollars and the education market for entrepreneurs and vendors. In the most extreme cases, it’s about ending tax-supported public education.

There’s a whole world of ways to provide more choices to students (including choices within the public system itself). Why do choicers insist that we should only talk about one particular approach?