Over at Forbes.com today I’ve posted a responsible grown-up look at the new Audrey Watters book Teaching Machines. But here at the blog, I can just go ahead and go full fanboy on this work, a book I was so looking forward too that I pre-ordered it twice. 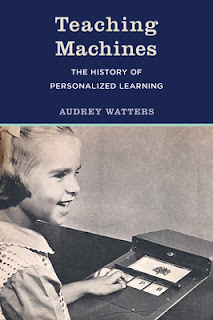 Watters opens with Sal Khan selling the same old chestnut– factory-model school was invented a hundred years ago and it hasn’t changed a hair on its head since, until I rolled out my awesome ed tech innovation. And then, in a compact, readable 263 pages, she sets the record straight.

If you follow the education debates, ed tech division, virtually everything in this book will sound familiar, because it turns out that for the last 100 years, ed tech’s pitch has stayed pretty much the same. They have promised game-changing innovation, aimed for behavioral engineering, and delivered almost none of what they’ve promised. It still matters though, as she points out:

Their ongoing influence can be found in the push for both personalized technologies and behavioral engineering. But teaching machines’ most significant legacy may be, quite broadly, in the technocratic culture that they helped engender in education.

Watters gives ample attention to B. F. Skinner and the focus on behavioral engineering. “If behavior was controlled and controllable by the environment, then what better way to make adjustments to individuals–and, as Skinner imagined, to all of society–than by machine.”

She’s located so many great quotes, some of which are truly astonishing.

“The only thing that matters is the future,” one entrepreneur commented. “I don’t even know why we study history. It’s entertaining I guess–the dinosaurs and the Neanderthals and the Industrial Revolution, and stuff like that. But what already happened doesn’t really matter. You don’t need to know that history to build on what they made. In technology, all that matters is tomorrow.”

But we ignore history at our peril. And the history that Watters lays out shows that we’re living in the echoes of earlier days.

Testing had quickly become a thriving industry, and vendors were “circling the world with psychological supplies.”

But he insisted that the machine would actually free the teacher “from the mechanical tasks of her profession–the burden of paperwork and routine drill–so that she may be a real teacher, not largely a clerical worker.”

Or the Ohio State students pointing out that the teaching machine would in no way alleviate the dullness and drudgery of test taking. In the 1920s.

This is the story of how teaching machines began and grew and failed and failed and failed, but still managed to promote a view of education as an engineering project. It’s about a long-standing belief in programmed learning, in way to standardize teaching. And it is, ironically, a story about how ed tech has stayed just as stuck for 100 years as the education system that it accuses of being unchanged.

This is a great book, as easily readable as Watters’ hugely popular blog Hack Education. Watters is smart, funny, and hugely knowledgeable in a way that makes it possible for her to connect many dots and see both the forest and the trees. Her blog was one of the first I read regularly when I first fell down the edubloggosphere rabbit hole, and one of the biggest treats of my ed commentary career was a few years back when I appeared on a panel with her at a Network for Public Education conference. She’s the real deal, a scholar anchored in the real world, as well as a sharp, insightful writer. There have been so many great education books to come out in the past two years; this belongs on your shelf beside them.