Curmudgucation: No, There Really Doesn’t Need to be a Big Spring Test in 2021

Many folks fear that schools will not trot out the Big Standardized Tests this spring, that neither the pony nor the dog will be called on to perform. Among those people, you can count Chester E. Finn, Jr., Big Boss Emeritus of the Fordham Institution and former player in the U.S. ed department; nowadays he serves the Hoover Institution (ever a source of reliable and not-at-all misleading info) as a senior fellow.

Finn popped up in the Washington Post this week to make his case that we just really so much need the BS Tests this year. I remain unconvinced. In all fairness, as regular readers know, I’m not convinced that we need them ever, but especially not this year. But let’s hear Finn out. 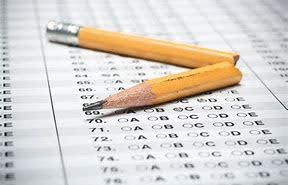 He notes that this will be one of the first calls the Biden administration will have to make (though hours after Finn’s argument went live, Betsy DeVos called to postpone the NAEP aka “the nation’s report card” for a year). Finn also admits that cancelling last year’s BS Tests made sense, but only because students weren’t in school so they couldn’t take the tests.

But don’t think for a moment that such diversions of the student data stream are without cost. The results from those state assessments are the main source of information about school performance and about pupil learning in the core subjects of the K-12 curriculum. The results also indicate whether America’s appalling — and persistent — achievement gaps are getting any narrower.

First, we need to fill in some blanks here. “The main source of information about school performance and about pupil learning” is doing a lot of work–what information, who is the information for, and what is it for? We skip over this constantly, or more commonly lump a bunch of end users and purposes together, but a test needs to have a very specific purpose and creates data for a very specific use. One of the reasons the BS Tests mostly stink is because they are trying to do a dozen different things at once. Are they to help teachers refocus or help administrators reconfigure curriculum or help bureaucrats apportion support or help think tanks analyze stuff? Because despite testocrats’ belief in magical testing properties, a test can’t do all that at once.

Second, if the purpose is, in fact, to unlock the secrets of the “achievement gap” (aka “test score gap”), there’s bad news. We already have tons of data, and absolutely no concensus about what it means. The researchers who do nothing but examine the gappage cannot agree on whether it is growing or shrinking or just sitting quietly doing needlepoint.

Finn says the test results are “the foundation of a school-performance measurement structure” that the US has been “painstakingly constructing” since A Nation at Risk in 1983. So many problems here. First, as laid out by Anya Kamanetz and others, ANAR was not an honest attempt to assess the state of public ed, but an attempt to build a case that public ed is broken and needs a big Reaganesque makeover. It was the opening shot in the conservative initiative toi unmake public education, and so the school performance structure that Finn lionizes was built to do the same–show that schools are failing and teachers stink etc etc etc for 35 years.

Now, remember what I said about how a test can’t be built and used for many different purposes? Here comes Finn:

The information from the tests is used at every level of the system. It enables parents to see how their children are faring on an “external” metric, beyond the grades conferred by their teachers, and it helps principals assess how their schools are doing. The results also equip superintendents to gauge what must be done to boost district-wide achievement, and they furnish state officials with the information needed to guide their assistance and interventions.

None of this is true. Parents get minor slivers of information about how their students did on a single math and reading test. Principals, like teachers, get fatally limited information too late to be particularly useful. Superintendents can gauge where test score improvements need to occur. And I will gladly hear stories about state officials who said, “Look at these test scores–we’d better pass some bills and move some resources so we can prop up that school right now.” At best, test results lead to nothing in particular. At worst, they are used like hailing signals for vultures, bright neon blinking “Hey, this school is struggling, so we’re about to strip it of resources. All you charter and private schools, come on down–it’s mealtime.”

Finn asserts that schools were unprepared to serve students in the fall without that critical data, but here’s the thing–the BS Test data is commonly not available in the fall of a normal year. Nor is it useful for anything that happens in September. The most normal–maybe the only normal–part of this fall has been teachers saying, “Okay, time to use my battery of formal and informal assessments to figure out where these individual students are.”

He’s right in suggesting that this school year is going to be messy and sucky and students are going to make anywhere from slightly less to a whole lot less progress than they would have in a country without Covid (or with a decent governmental response to it).

How will parents and teachers know which students need the most catch-up in which subjects? Who has the greatest need for summer school or tutoring? And how will district and state leaders know which schools coped better and worse?

Several problems here. First, “catching up” implies that there is some objectively determined line that students should be meeting. Catching up to what? Behind what? Every single thing that describes “where students should be” is a construct, a made-up measurement that encourages some students to think of themselves as damaged or deficient.

Third, district leaders will know the same way they’ve always known. And state leaders? Well, what exactly do state leaders need to know, and why? I am a big believer in accountability of some sort; as a taxpayer, I want to know that my money is being well spent. But do BS Tests supply state leaders with actionable data? And if so, what sorts of action do they take? Because history tells us that state leaders mostly don’t do much that helps.

Just look at the current pandemic mess. State (and federal) leaders could have rushed a small mountain of money to help open schools more safely. Or they could have mobilized resources over the summer to help schools prepare to more effectively handle distance learning. Mostly, they didn’t do either. Nor is the decades-long history of test-centered schooling marked by states rushing to the aid of schools that ended up on the low side of the scoring continuum. Mostly low test results have marked schools with a scarlet P, for privatization, because the BS Tests have not been used as tools for help so much as instruments of punitive policy–get your scores up or lose resources. Low test scores have not been treated as a cry for help, but as an excuse for punishment. Nor have the Great Turnaround Experts turned out to be particularly good at turning schools around.

So when you tell me that state leaders need to see those test results, I’m going to ask why? What do they want to know? What do they plan to do? Do Michigan’s leaders really need to see test results to know that Detroit schools are having problems? And if state leaders really have a desire to improve schools, is a one-time, narrowly-focused, poorly-designed standardized test really the best way to find out what they need to know? (Spoiler alert: no).

Finn is sure that there’s a disaster brewing, and there’s no question that schools are having a rough year of it and consequently students are not getting the kind of educational year that would better serve everyone. Testocrats like Finn are certain that we can’t possibly address this without testing measurements. “America,” Finn says, “won’t know how bad the damage is or what needs fixing.” Well, “America” is a pretty broad, unclear term. It’s teachers and parents who are actually doing the work, and they’ve mostly been left on their own to do it.

And in a year when time is going to be a precious commodity, every single element of the school year has to be questioned–does this help my students move forward? BS Testing does not meet that measure. There are better, more important things for teachers to be doing than getting students prepped for the test and then administering it. And if “America” wants to know how things are going, I suggest that they ask the people who are doing the work. In fact, I suggest that state and federal leaders  (and thinky tank gurus as well) get out of their offices and go ask teachers and parents, “What do you need? What can I do to help?” I am betting that nobody is going to answer, “Please, oh please, can you make sure that we give the Big Standardized Test this spring.”