The idea that we can educate poverty away has been a popular one with policymakers and politicians for years now. Here’s just one example, from Janet Yellen, former Fed Chair and, possibly, future Treasury Secretary, back in 2017:

Yellen spoke to a conference on community development today, where she says that providing children with the opportunity to learn important skills earlier is essential to ending this generational cycle of poverty.

“This research underscores the value of starting young to develop basic work habits and skills,” she said. “These habits and skills help prepare people for work, help them enter the labor market sooner, meet with more success over time and be in a position to develop the more specialized skills and obtain the academic credentials that are strongly correlated with higher and steadier earnings.” 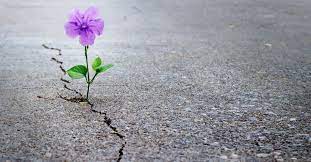 You can find this kind of idea echoed at the international level or when plugging particular edu-programs— education ends the “cycle of poverty” or “lifts the economy.”

Now, I am not an economist (though there are so many economists that pretend to be education experts that it would serve them right if I got in their lane), so I may be missing something here. Feel free to sort me out in the comments.

But it seems to me that two things are being conflated here. One is that education can help an individual escape poverty. That one makes sense– Pat gets an education and can quit that job at the widget factory assembly line and get a better one designing widgets or VP of widget marketing.

But the second idea–that education can end poverty as a whole–seems more problematic. Pat leaves the widget assembly line job, which pays minimum wage with no benefits and only provides 29 weeks of work per year. When Pat had the job, Pat was among the working poor. But when Pat leaves the job, the poverty-creating job, is still there and will be filled by someone else, who will still be a member of the working poor. So Pat’s life improves, but the total poverty that exists remains the same.

I am stumped on how the education-ending-poverty thing works. If everyone in the country has a masters degree, does McDonalds start paying its burger flippers $20/hour? Would Walmart suddenly start paying big money and benefits because every single stocker has a degree? Will companies that used to hire 10 people with masters degree now hire 20 just because they’re so plentiful, so that the available jobs for highly educated people will grow?

None of that seems likely. Businesses are not replacing humans with computers because they just can’t find humans who are well-educated enough. Businesses did not outsource jobs to other countries because the people there are so much better-educated. And businesses, as we have seen demonstrated with stimulus funding, companies don’t hire more people just because they have some spare money lying around. Businesses outsource and cybersource because it saves them money. The level of education for the people they’re avoiding paying doesn’t change that.

Maybe the idea is that if everyone had more education, we’d suddenly be awash in entrepreneurs creating start-up businesses left and right. This seems… unlikely. Or maybe better-educated people would be more productive and that boost in productivity would lead to–oh, never mind… 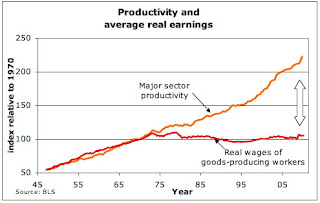 (Okay, here’s a differing view of that infamous chart, which is a long read and at the end, doesn’t make things look much better for US workers).

My cynical non-economist view is this– “education will fix poverty” is an excellent way to absolve all the other players. Politicians and policymakers don’t have to address the problems of poverty because, hey, if the schools would just do their jobs, poverty would be fixed. Business leaders don’t have to behave like responsible members of society instead of oligarchs because, somehow, it’s not their fault that their business is built on the backs of underpaid, ill-used fellow citizens. It is yet another more subtle way to blame the poor for being poor, as if the Captains of Industry are looking down at the meat widgets saying, “Look, if you had more education, I’d pay you more to do that job.”

Does all this mean we should not do our best to give every student the maximum educational tools so that they can lift themselves just as far and high as they can? Absolutely not–the gig is to give every student all the tools, all the knowledge, all the power that education can give a person. We should fight poverty, and arm students to fight it. But schools can’t do it all themselves; lifting individuals out of the tar pit of poverty doesn’t clean up the pit itself.

And when people start using “poverty” and “education” in the same declarative sentence, be clear on what they are talking about–helping individuals rise, or cleaning up fundamental injustices in society because society’s leaders don’t want to do the job. Escape poverty, or fight it? The first job may belong to schools, but the second belongs to everyone.