As widely noted, Florida’s Governor Ron DeSantis has had a testing epiphany. “More learning and less test prep,” he says, and his right hand education man Richard Corcoran says, gee, testing really is a waste of as lot of time (he only just noticed this during the pandemic BS Test suspension period). Man, that Big Standardized Test is bad news, says the top guys in the state that wrote the book on the cult of testing. 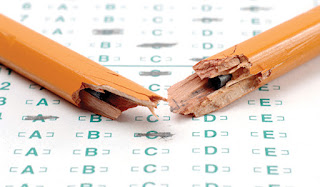 If you follow me over at Forbes, you know I’ve already written about this. However, at Forbes my job is to be reasonably calm, considered and factual. I come here to the Institute to vent my spleen, and my spleen says that this all smells like a lot of fertilizer.

Or as a friend of mine put it, Florida is replacing CCSS with B.E.S.T. and the governor now wants to replace FSA with F.A.S.T., and it all will produce C.R.A.P.

The governor’s proposal is to replace the Big Standardized Test with progress monitoring. In other words, instead of one big high-stakes standardized test at the end of each year, an unending string of high-stakes standardized tests throughout the entire year. The BS Test would be gone, but all of the high stakes, from the stupid school letter grade rating system to test-based teacher evaluations–that stuff stays. The ability to run down the public education system as a means of marketing Florida’s fifty-seven varieties of school choice–that stays.

So while DeSantis has now disavowed two key pillars of Jeb Bush’s reformy policy, the heart and soul–crush public education and sell off the parts–is still firmly in place.

In some ways, F.A.S.T. is worse, because testing and punishing assessing throughout the year means that the high stakes never let up. And assuming that this unending barrage of tests is delivered by computer, Florida would be generating a mountain of student data. That’s a lot of money, and it’s also an opportunity to start deep and damaging files for each of those students.

Computer-delivered low-cost high-data-yield competency-based education-flavored products have been a dream of some folks for years now. Now one looks to be taking a shot.

The state government and department of education are already treating this as a done deal (presumably the legislature will do as it’s told) and bragging that they are the first state in the nation to go this route. We’ll see if the feds think this is an acceptable way to meet the requirements of ESSA. It’s going to make some testing company a load of cash, set new standards for data mining, and show new heights in test-centered schooling (every week is test prep week). And it will presumably provide DeSantis a better way to garner some national political 2024 attention (because going pro-covid isn’t looking like a winner right now). Of course, Jeb Bush thought he was going to ride education to the White House as well…

But if you aren’t paying attention to this story, you should, because when it comes to destructively bad ideas in education, all roads lead us back to Florida. Guaranteed that GOP strategists around the country are watching this and thinking, “Hmmm…. maybe we should try this…”

DeSantis is making a play for it; all the more interesting because he’s burned the single BS Test bridge behind him. There’s not really any “Oh, I guess the Big Standardized Test is awesome after all” way back. He’s committed. Here’s hoping nobody else gets encouraged by it.