Curmudgucation: Can We Close the Billionaire Learning Gap?

Imagine you had a student in your class, for some reason, for ten, fifteen, even twenty years. Imagine that you gave that student multiple opportunities to learn some central concepts for your course. And yet, somehow, these students remained absolutely impervious to the learning. What would you do?

It’s only a slightly hypothetical situation.

Let’s talk about the billionaire learning gap. Let’s talk about how certain really rich people who have an apparently uncontrollable urge to fiddle with education and yet remain rank amateurs who still haven’t learned things about education that the average third-year teacher already knows. 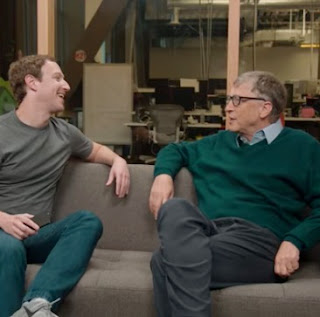 We have to talk about this because here they come again. The Gates Foundation, the Chan Zuckerberg Initiative, and the Walton Family Foundation have announced that they are ponying up $200 million for yet another education initiative.

The initiative is called Advanced Education Research and Development Fund (AERDF–and can we talk for just a second about how there is already an AERDF and are you kidding me that nobody bothered to google the name before they picked it). Motto: “Tackling intractable teaching and learning challenges that disproportionately affect Black, Latino, and students of all races experiencing poverty.” Their mission, in part:

AERDF staff works with teachers, students, education leaders, researchers, and developers to identify problems and opportunities that can be tackled through Inclusive R&D programs. This exploration will help identify Program Directors who can build on existing evidence and learning science to design multi-year Inclusive R&D programs to translate fundamental insights into more useful practices, approaches and tools.

The CEO is Stacey Childress, who’s last-and-concurrent gig was CEO of NewSchools Venture Fund, where venture capitalism meets opportunities in education-flavored products. Before that, Deputy Director at the Gates Foundation, and before that led the Social Enterprise Initiative at Harvard Business School for a decade. Before that, worked for ADT as a corporate sales exec. Right after she got her Baylor degree in English Language and Literature she spent a year as a long-term substitute teacher, but otherwise no actual education experience.

You can see some of what she absorbed from the gates.

On Linkedin, explaining AERDF: “Investing in moonshot education R&D programs to push our understanding of what’s possible for learning and opportunity.”

Speaking to Chalkbeat” The ideas will have “moonshot ambitions.”

Nobody believes in those magic moonshots, those shining silver bullets, like the Billionaire Amateur’s Club. After years and years of big-spending initiatives, from small schools to improving teachers to the Common Core–not one of which actually worked–in March of 2020 Gates and the then-Missus were talking about “swinging for the fences” and coming up with that big hit that would change the whole game. In all those years, Gates never learned a thing from his failures; the closest he ever came to “I made a mistake” was various versions of “I didn’t understand how much the little people would get in my way and thwart my genius ideas.”

Meanwhile, Zuckerberg blew a cool $100 million in Newark, then went on to set up the Chan Zuckerberg initiative which continues to push various forms of cyber-school or education-in-a-box and personalized [sic] learning, while co-opting very Silicon Valley edu-flavored boutique businesses (and Elmo). He reportedly really wants to be Bill Gates when he grows up, and he’s on track with his investment in Things That Don’t Work.

I suppose you can argue that the Waltons are successful in that they have been able to back plenty of schools based on the Walmart model. So, a win for them, a win for charter profiteers, but not a win for US public education.

All have had ample opportunity to learn about education and how it actually works. All have failed. Exhibit A is the Moonshot Mentality, the notion that there is some silver bullet, some clever trick that has been missed, somehow, by the millions of trained experts working in the field but which these amateurs, with their great stacks of money, will somehow spot. Because if you know how to bull and wrangle your way into billions in business, clearly you are the person to unlock the secret of teaching fourteen year olds about the quadratic equation. Also, if you have lived surrounded by shiny white wealth your whole life (and I do mean your whole life because none of these people grew up remotely poor), you are clearly the person who can best understand what is needed to help poor Black and Latino children. And of course the solution is never, ever, to make sure that you are paying a hefty fair share of the taxes needed to funnel resources to the agencies already working on all of these challenges.

And yes, you can argue that at least they aren’t spending millions on cocaine and hookers and giant penis rockets, but the fact is that these amateur-hour grandstanding adventures have problematic effects. First, they use up resources that could have been better used elsewhere, and I don’t just mean the rich amateurs’ money, but other peoples’ money and time and human resources all devoted to trying to achieve liftoff for these vanity projects. Second, they have derailed important, useful conversations. Exhibit A: In the late 90s, we were talking a lot about authentic assessment and how to assess students in ways that would really mean something. But then accountability amateurs took over, and by the time Gates was helping force-feed Common Core to the masses, amateurs had shifted us over to “It doesn’t matter if it actually measures anything–what matters is that it generates numbers that can be compared across the country.”

As an educator, I have to ask– why can’t Billy and Mark learn? Are their personal circumstances interfering? Is it family of origin issues? Do they have special needs that aren’t being met?

And more importantly, how can they possibly work on a system for helping other people learn when they cannot even learn themselves? We need to figure out how to bridge this billionaire learning gap, and soon, before they launch another project.