The movement to privatize public education is gaining ground in the United States at a time when traditional public school districts are facing some of the most severe challenges ever.

According to a report by an advocacy group that supports traditionally funded and democratically governed public school districts, a number of Republican-led legislatures pushed through legislation to expand charter schools and voucher programs during the coronavirus pandemic. Most often these were passed without serious safeguards to ensure that students, families and taxpayers are protected from “discrimination, corruption and fraud” that has marred a number of these programs.

The report, by the Network for Public Education, is a follow-up to a 2018 report by the network and the Schott Foundation for Public Education, which gave five states an “A+” or “A” in regard to their commitment to supporting public schools. In the new report, two states — Nebraska and North Dakota — received an overall grade of “A+” while one state, Vermont, got an “A-”.

There was a decrease in the number of states earning an overall grade of “B” or “C” — 15, seven fewer than in 2018, the report says. The number of states receiving a “D” doubled from six to 12, and the number of states with “F” grades increased from 17 to 20, with the District of Columbia making 21 systems, according to the report. The states with “F” grades are Arizona, Arkansas, Florida, Georgia, Indiana, Iowa, Louisiana, Mississippi, Missouri, Nevada, New Hampshire, North Carolina, Ohio, Oklahoma, Pennsylvania, South Carolina, Tennessee, Utah, West Virginia and Wisconsin.

“School choice” is, supporters say, a movement to expand alternatives to traditional public schools for children who have poor educational options in their neighborhoods and to give parents a choice in their children’s education. Critics say that using public funds to support “choice” schools is undermining the traditional public system, which educates the majority of America’s school-age children, and that privatization gives nonpublic schools the right to discriminate and operate without public scrutiny.

While the choice movement is not monolithic, its most prominent advocates are pushing for public funds to be used for private and religious education. Choice advocates such as former education secretary Betsy DeVos and Florida Gov. Ron DeSantis (R) have called for a new definition of public education — one that says that any school getting public dollars should be considered a public school, even if the public has no say in how it operates.

Those who support choice may be buoyed by the report’s findings that privatization is growing, while critics may be alarmed. “The privatization of public education is now in its adolescence,” the report says. “It has achieved the full-throated support of the right-wing, which now controls many state legislatures. Conserving public schools and local control is no longer part of a conservative platform: destroying locally controlled public schools via privatized choice is.”

The new report looks at the expansion of privatization, educational quality, student rights and protections, accountability and transparency, and safeguards for taxpayer dollars. Choice initiatives include voucher and voucherlike programs and charter schools.

Charter schools are publicly funded but privately operated, many by for-profit companies. Voucher and similar programs use public money to pay for private and religious school tuition or provide tax credits to people who contributed money for that purpose.

The Biden administration recently proposed regulations on the federal Charter School Program to try to meet a campaign promise the president made that he would eliminate federal funding for for-profit charter schools, which have been at the center of major financial scandals.

Charter supporters have attacked the proposed changes, saying that they are aimed at eventually eliminating federal support for charter schools. Biden showed no sign of doing that in his budget proposal, which maintained the charter-program level at $440 million.

This map shows the report’s overall grades, given from the perspective of the Network for Public Education, which opposes the choice movement. 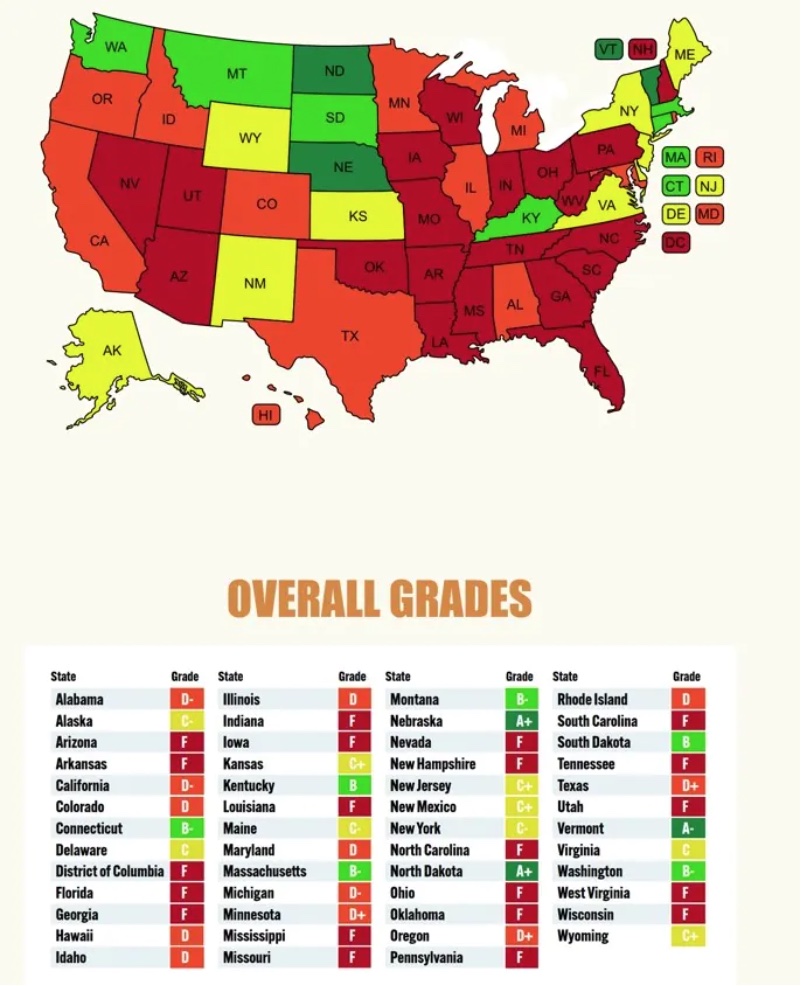 You can see here how points were awarded for the network’s findings, which include:

Here is the full report: