Early this year, my Washington Post colleague Jay Mathews and I published conflicting pieces about whether charter schools — which are publicly funded but privately operated — sometimes control which students are admitted.

Jay said in a column that it is something of a myth that charter schools pick and choose students; I published a post by Kevin Welner, director of the National Education Policy Center at the University of Colorado at Boulder, who researches school choice (among other topics).

Welner and co-author Wagma Mommandi have published a new book, “School’s Choice: How Charter Schools Control Access and Shape Enrollment,” that describes how the decisions that charter school operators make affect who is permitted to enroll in their schools. The piece below, by Welner, delves into the issue.

Why does it matter? Charter schools have become a central part of the national debate over “school choice,” what constitutes public education, and educational equity. Charter school advocates often say that these schools are open to all students. If charter schools can, to any significant degree, choose their students, attempts to compare their performance with public schools in traditional school districts are useless. If they can choose students, claims that they promote educational equity are up for debate.

You can read an excerpt from the book here.

Consider the following four key claims made by advocates of charter-school expansion:

As shown in each hyperlinked document above, these claims are poorly supported. Each claim also rests on the dubious contention that charter schools are as accessible as district-run public schools. The nation’s main charter-school advocacy organization asserts that charters are public schools that “do not have special entrance requirements” and are “open to all students.” But this claim is not true.

“School’s Choice,” my new book co-authored with Wagma Mommandi, identifies, explains, and documents 13 different approaches that charter schools use to shape their enrollment. And access is the linchpin of core charter claims. When enrollment is “biased” in the sense that charter schools do not broadly serve the community’s students, it severely undermines our ability to compare funding, growth, or achievement.

In many ways, the incentive to engage in selective enrollment practices is baked into the model. School-finance and test-based-accountability systems create strong incentives that encourage people running charter schools to enroll students who have lower needs for expensive services and have richer opportunities to learn outside of school.

Readers of “School’s Choice” will see how the deregulated nature of charter schools unleashed exclusionary practices and turned them into powerful tools for controlling access. Charters’ autonomy amplifies their capacity to weaponize access in a school-choice environment, as compared to district-operated public schools competing within that same context.

The relative lack of rules and constraints has allowed the most unscrupulous operators in the charter sector to create exclusive enclaves that push away unwanted students while amassing millions of taxpayer dollars — even as they outwardly and cynically proclaim their publicness.

Consider again those four key claims — about student achievement, competition, segregation and funding. Accept for the moment (until you read the book, at least) that many charter schools shape their enrollment in ways that are biased against students who have fewer expensive needs and better outside-school opportunities to learn. Now recall all those media stories and think-tank reports you’ve read over the years arguing, for example, “If charters do more with less, why can’t traditional schools do the same?”

We ask counter-questions, such as:

Some advocates of charter school growth see benefits when charters shape access and control their enrollment. Charters, the argument goes, should skim — they should be for “strivers.” Access restrictions linked to strict discipline, for example, are seen as “a feature, not a bug.”

Yet, even setting aside what this means for the contention that charters are “public” schools, this approach has practical implications about, for instance, stratification (by special needs, immigration status and first language, race and ethnicity, parental education, and income). It also has implications about whether the reform can be scaled up. And it has implications for funding and for measuring outcomes.

Regarding the latter, please consider the daunting challenges researchers face when they attempt to measure the student outcomes of school choice policies. There are two main types of charter school outcome studies: those using lotteries that separate students offered admission to charters from those denied such admission, and those using data sets that include student records over multiple years, with student-level identifiers linked to outcomes, demographics, and other fields.

Each of these two approaches comes with strengths and weaknesses. Because of the randomization element of lottery studies, many researchers consider them to be of higher quality, but they are not generalizable to charter schools that are not overenrolled, which are presumably of lesser quality. They may also not tell us much about how well these schools would do with the population of students whose families did not participate in the choice process (i.e., did not apply for admission in the first place). Moreover, the randomization element of these studies is greatly oversold, as Bruce Baker has explained.

Studies using longitudinal data sets to measure charter school outcomes have the benefit of being more generalizable to a larger population, but are undermined by so-called internal validity problems. These studies use ordinary least squares regression or matching (propensity score or “virtual twin”) approaches to generate models that compare charter school students to a group of students enrolled in local public schools. By controlling for these measured differences in prior test scores, race and ethnicity, and eligibility for free or reduced-price lunch, the studies attempt to isolate the impact of the charter school “treatment.”

But this approach is particularly susceptible to omitted variables linked to the core reality that students are not randomly assigned to charters and non-charters. The parent or guardian of a student enrolled in a charter school has, by definition, actively opted into the choice process.

In contrast, we can think of the group of comparison public-school students as including two subgroups: (1) all of those students with parents or guardians who did not engage with the choice process because they lack the time, resources, or social capital to engage; and (2) students with parents or guardians who have the time, resources, or social capital but decided against the charter school option. This second subgroup houses the most appropriate (yet imperfect) comparison students, but researchers don’t (and really can’t) separate them from the first.

Researchers also cannot fully account for the differences by merely controlling for factors like prior test scores, race and ethnicity, and eligibility for free or reduced-price lunch. For an example of how some of these problems play out, see this recent review by Yongmei Ni and Eunice Han. In addition, see Andrew Maul’s review of CREDO studies.

Access issues amplify these problems of nonrandom assignment because they can introduce a systematic enrollment bias in particular directions (e.g., charters will enroll fewer students with parents who could not or did not negotiate a complicated choice process). This is most obvious for some “elite” charter management organizations that make no secret of their disinterest in students who lack the right “fit.” But even subtler enrollment-shaping choices like location and advertising can result in systematic yet unmeasured differences between those families that apply for enrollment and those that do not.

The “competition” claim set forth at the outset of this piece also falls apart as soon as we realize that charters gain a competitive advantage when they selectively compete for their desired students and, in some instances actively avoid enrolling entire groups of students. Some states, such as North Carolina, Louisiana and Delaware, encourage this by expressly allowing charter schools to screen for desired characteristics such as academic ability, to fulfill the charter’s “mission.”

In truth, even broader reforms would be helpful, since public schools in general come up short regarding access. Elite, district-run schools in Boston and New York City, for example, have also required students to compete through special exams to qualify for admission. Several other district-run public schools have used GPA cutoffs to qualify for admission. Further, many public schools have imposed harsh discipline policies similar to those that Mommandi and I describe in charter schools.

There are, however, three key differences between charter-school access issues and those in district-run public schools. First is simply the issue of prevalence. There are approximately 24,000 public high schools in the U.S., and there are probably fewer than two dozen that are exam schools (eight of which are in NYC). Practices such as these are simply more prevalent in charter schools.

Third, and perhaps most importantly, the choice context empowers charter schools to use access barriers as a way to push students away (or out). Overuse of suspension or threats of grade retention in a neighborhood public school are practices rightly considered to be harmful, but charters can combine these harmful practices with a clear message: The way to escape these threats is to transfer out of our school.

Policy reforms focused on accountability, funding systems, compliance, and transparency could change the context within which charters operate. This would, in turn, benefit the best charter schools and benefit the overall education system. But charter-school advocates have thus far resisted legislative change.

Here’s a challenge to researchers, reporters, and readers: The next time you hear a claim about charter schools, ask yourself, “How well does this claim hold up once we recognize the access differences between charter schools and district-run public schools?”

And here’s a challenge to policymakers: If you think of charter schools as part of the public school system (“open to all students”), and if you want that to be the case, does the current legal structure and system of incentives and disincentives really support that outcome? 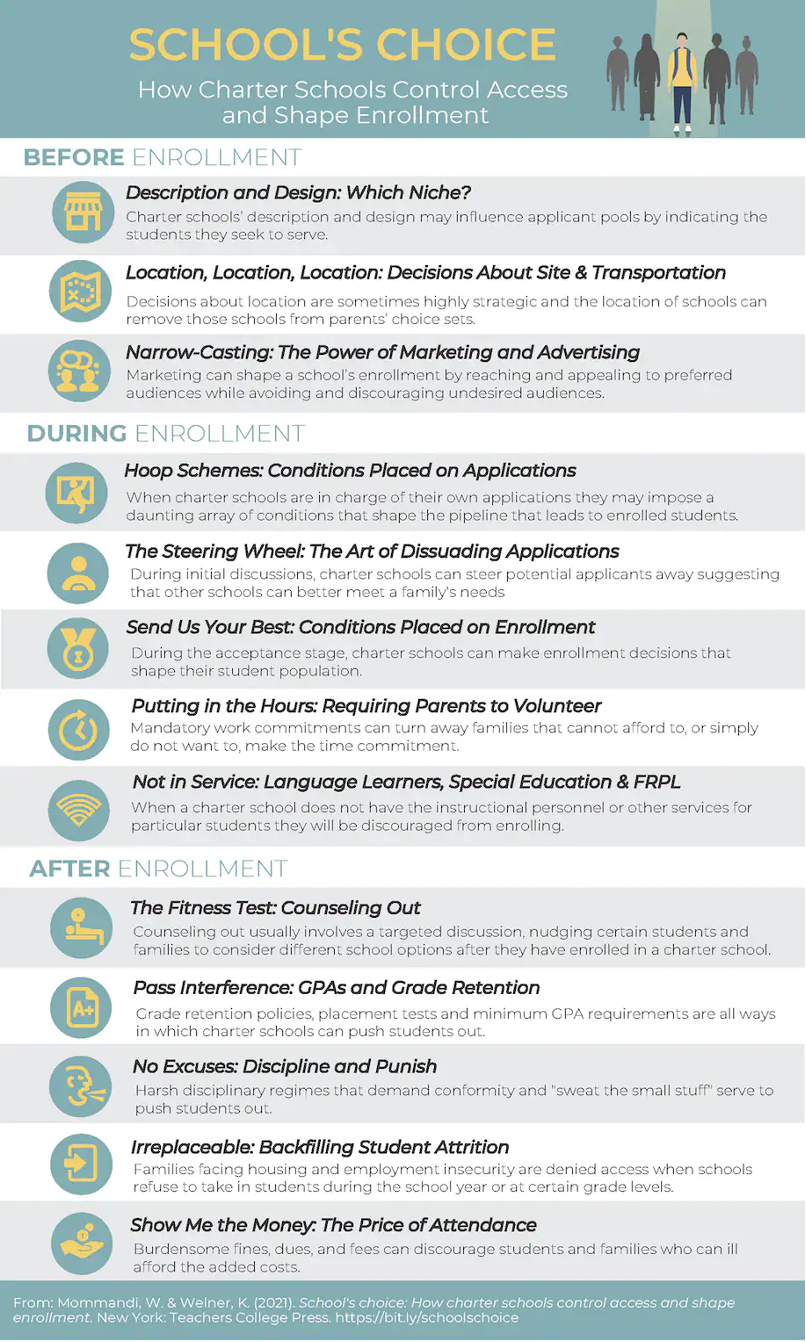