Let’s discuss charter schools — a topic you’ve seen a lot of on this blog over the years, but has kind of gone away recently for obvious (COVID) and non-obvious (Vouchers/School Funding) reasons.

Despite House Bill 2, which was supposed to slim down our notoriously poor-performing charter school sector and the closure of the nation’s largest online school — ECOT — which closed because the school literally stole hundreds of millions of tax dollars to educate kids they never educated, we are currently spending more on charter schools than any other year on record. 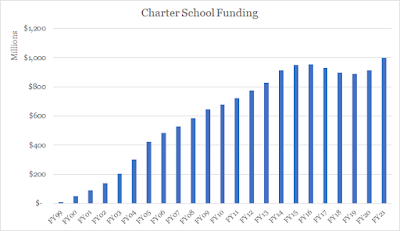 According to the latest Charter School funding report from the Ohio Department of Education, we are set to spend $999.7 million. The previous record was $955 million from the 2015-2016 school year — the high-point of the ECOT years.

Despite this massive recent increase (an extraordinary $111 million jump … over two years), it’s not because we’ve had more students attending charters than ever. 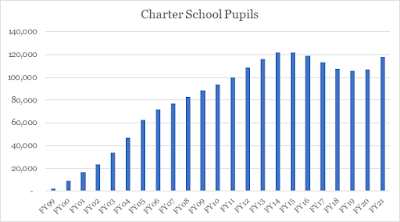 It’s because Ohio politicians have continued bumping up the per pupil amounts flowing to charters. So now kids in Ohio charters, on average, get nearly $8,500 per pupil in state aid — about double what that same kid would receive in a local public school. 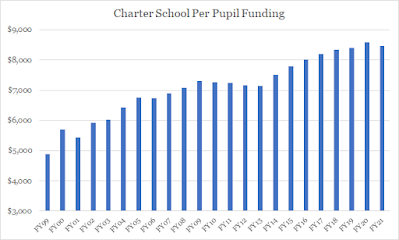 As I’ve recounted for more than a decade, because of the way we fund charters, that means that local property taxes have to subsidize charter school kids.

It doesn’t take a Ph.D. in Rocket Science to understand that if you’re removing $8,500 in state aid from a district for a kid the district was only getting about half of that from the state to educate that the difference has to come from somewhere.

This year, that subsidy is slated to be $148 million. And in some districts, it’s really high. Like in Columbus where $62 million in local revenue has to subsidize the state funding deduction for charters.

As an aside, this local subsidy problem could be fixed with House Bill 1, which would directly fund charters and vouchers, among other great things.

Anyway, don’t be shocked when you start hearing charter school proponents talk during this budget cycle about charter funding “equity”.

By the way, “equity” in this sense means equality, not the equity you and I think about — like making sure kids from disparate backgrounds and challenges receive the additional supports they need to succeed. No. When charter folks say “equity”, they mean the state should pay charters what districts get from state and local revenue.

Anyway, the data demonstrates pretty clearly that charter schools have plenty of money right now to educate their kids. Why? Because they don’t have to adhere to 150 plus state regulations, pay for buses and pay their teachers 40% less, on average, than districts with leaner benefits.

So you don’t have to spend nearly as much in a charter as you do a district.

If only charters spent the same 14% of their revenue on non-instructional administrative costs rather than the 24% they currently spend.

I ask you, dear reader, do you think that charter schools need more money? Or more efficiency?

Hmmm. Where have I heard THAT before? Oh yeah. From charter school proponents about local public school district spending. 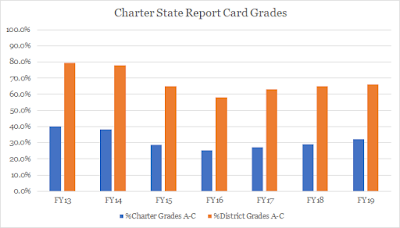 I give you this overall horrible performance for you to mull over as the state considers investing more than $1 billion in this education sector that’s produced more state report card grades of F than all others combined since we’ve had the A-F system.